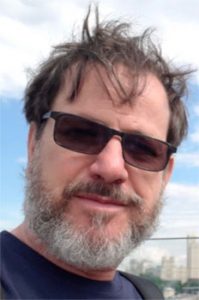 Colombian, theater director and pedagogue. Disciple of Anatoli Vassiliev (1942). Graduated in GITIS (1986-1991), he was a student of Boris Gavrilovich Goluvotski and in his last two years of graduation, coordinated by Anatoly Vassíliev, of whom he was an actor for four years. Along with Ma Zhenghong, he published the 16 lessons and other materials of Mikhail Chekhov, an unpublished material developed by M. Tchékhov in 1932. The publication shares lessons taught to the actors of the State Theater of Lithuania, describing exercises and training principles of his pedagogy. He is a professor from the Department of Performing Arts of the University of Valle, Cali, Colombia, since 1996, where he coordinates the execution of a master’s degree for theater directors. He was at Teatro Escola Macunaíma in two occasions, in 2016, to give a lecture to the school teachers entitled Active Analysis and in 2017, to minister the Games of Ensamble and structure, the theater principle of Michael Chekhov. In São José dos Campos, he led the Immersion Tchekhov Residence: the focus on the scene – the theatrical know and do, held at CAC Walmor Chagas, at the company Teatro da Cidade, where the Colombian maestro led the company actors and guests in a scenic experiment extracted from Tio Vânia by A. Tchékhov, also in 2016. He is a part of the Editorial Board of CLAPS – Latin American Center for Stanislavski Studies.