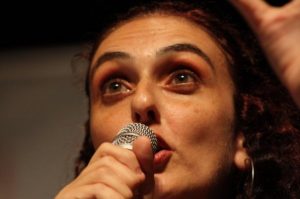 Associate Professor at UNIRIO, acting in the Department of Interpretation and in the Graduate Program in Arts of this University. He has been studying Grotowski’s work and trajectory for more than 20 years, having written numerous articles on the theme (Presence Studies, Lume’s Magazine, Sala Preta, etc.) and the book Practiced Words: the artistic trajectory of Jerzy Grotowski, by Perspective, in 2012. In those years, she participated in some internships taught by Grotowski’s collaborators of different stages (Kahn, Robart, Molik, Slowiak, Biagini, Richards, among others). Since 1999, she has worked with the Workcenter of Jerzy Grotowski and Thomas Richards, a frequent professional relationship, doing and accompanying workshops, conducting lectures and participating in publications. Tatiana also organized seminars on Grotowski’s work, notably, in 2009, the Grotowski Seminary, a Bigger Life than the myth that brought to Brazil, for the first time, Ludwik Flaszen. In 2016 and 2018, she organized the Seminar Stanislavski I and II (along with Michele Zaltron). As a pedagogue, Tatiana has dedicated herself to reflect on the creative process of the actor / actress, teaching practical and theoretical stages to actors and dancers, writing about the theme (Sala Preta, Illinx, Revista Rev., Etc) and participating in the “International Studies Network of Presence “, coordinated by Gilberto Icle. Tatiana is an actress (sporadic) and a director. She directs the group Hanimais Hestranhos, with which she developed, between 2016 and 2017, a practical research about acting and subjectivity – who is, or can be, this ‘me’ that acts? – having as literary reference the works “The unspeakable” of Samuel Beckett and “Book of the Disquiet” of Fernando Pessoa. Currently, she supervises two shows: The Woman Who Turned into Plant, with the actress Bruna Trindade and the direction of Vitor Medeiros (under construction) and Divine and Human, conceived and performed by the actress Rosana Reátegui. Tatiana participates in two CNPq Research Groups: CRIA: Artes e Transversalidade and Artes do Movimento. She is also a member of CLAPS artistic council, the first Latin American Center dedicated to Stanislavsky’s legacy research.